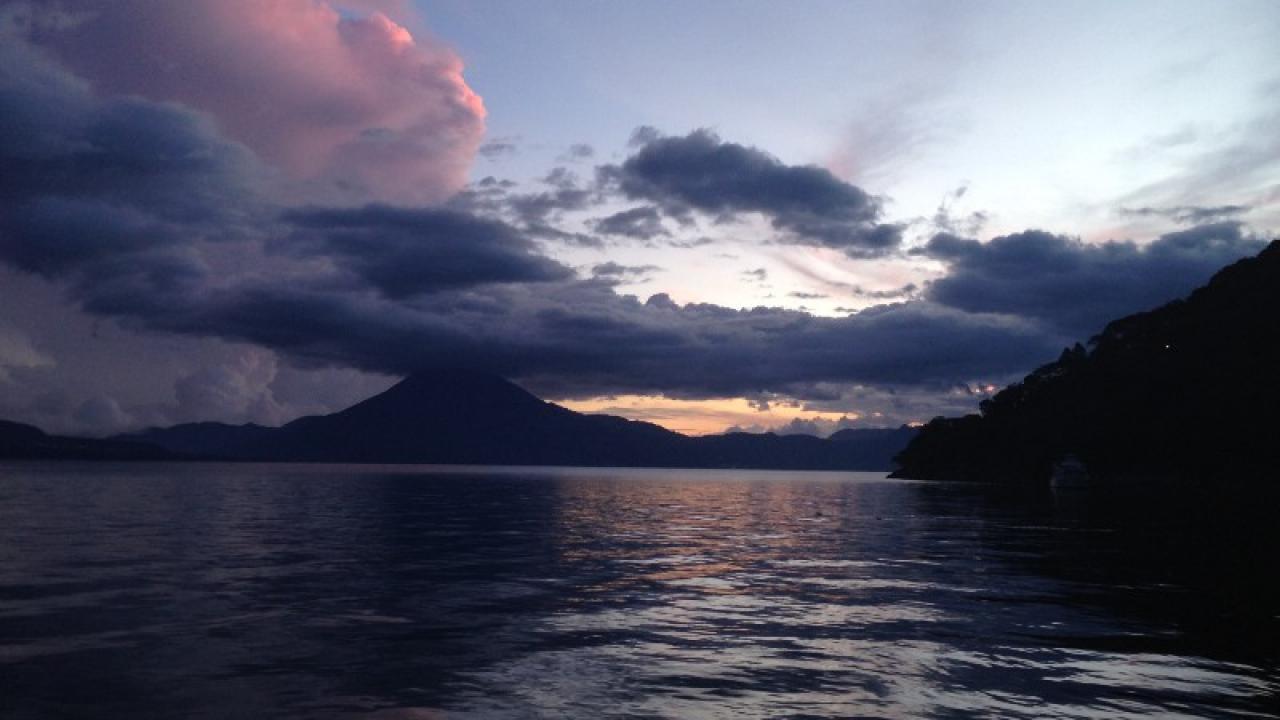 As writer and philosopher Aldous Huxley once stated in his 1934 travel book Beyond the Mexique Bay, “Lake Como, it seems to me, touches on the limit of permissibly picturesque, but Atitlán is Como with additional embellishments of several immense volcanoes. It really is too much of a good thing.”‪

Located in the western highlands of Guatemala, Lake Atitlán, the deepest lake in Central America, has been frequently described as one of the most beautiful lakes in the world. Along with its breathtaking aesthetic qualities, more than 100,000 people in the region rely on the lake for their primary source of drinking water. The lake is also used as a source of income and food for the eight villages that border the lake.

Unfortunately, Lake Atitlán is experiencing similar issues that hundreds of lakes around the world are currently facing. Due to multiple, interacting anthropogenic impacts like fertilizer use and sewage runoff, the overall water quality of the lake has gradually declined over the past few years.

Starting in 2008, the widespread emergence of cyanobacterial blooms of Lyngbya robusta left the lake temporarily stagnant and murky. When more and more nutrients (in this case, nitrogen and phosphorous) are continuously added to the lake through the increased fertilizer use, sewage runoff, and other human activities, the process of eutrophication begins to occur; ultimately, this process creates the conditions for species of cyanobacteria, such as Lyngbya, to successfully thrive.

Lyngba does not produce harmful cyanotoxins like other species of cyanobacteria; it can eventually evolve to create cyanotoxins that impact the lake and the thousands of people who rely on it. Although the emergence of eutrophication can be a natural process, the human-induced addition of nutrients is the leading cause of eutrophication on the global scale.

Furthermore, the cyanobacterial blooms that result from eutrophication eventually lead to hypoxic (extremely low oxygen) conditions that are generally unfavorable for the majority of organisms within the lake ecosystem.

Along with several other researchers that are studying Lake Atitlán, Eliska Rejmánková, a UC Davis professor who has been studying the lake for several years, does not believe that the lake should be perceived as “dead” or “dying” in any way, shape, or form.

While Eliska agrees that the overall status of the lake has significantly plummeted over the years, she also agrees that it is all the more important to recognize that the lake is not simply dead.

Hugo Villavicencio, a master student at the University of Alaska Anchorage that is currently studying fish populations in the lake, shared a similar sentiment.

“The lake is not dead, it is just at its tipping point,” Villavicencio said.

What would be the point of working to conserve something that is “dead” or “long gone”? By declaring the death of the lake, conservation movements and measures will not be as actively implemented and kicked into as high of a gear. The lake is very much alive.

Since more institutions have recognized that a growing body of research is needed to effectively address the plethora of issues the lake is experiencing, Lake Atitlán is currently studied more than any lake in the world.

Fortunately, a growing number of governmental agencies, non-governmental organizations, (NGOs) and research institutions are collaborating together to not only research the lake, but also guide conservation strategies, education, and legislation. 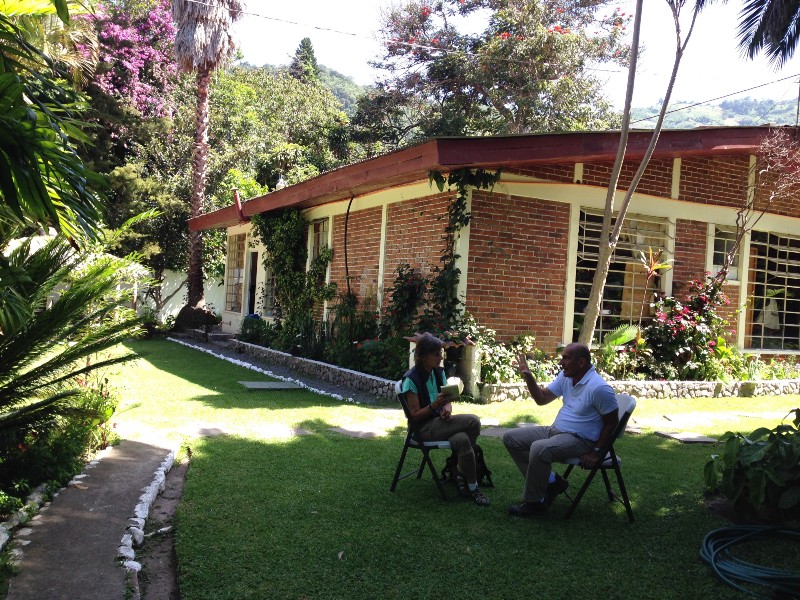 “The problems that we are facing right now necessitate and create opportunities to learn,” Villavicencio said when discussing the project.

Currently, Villavicencio is working on a five-year project with USAID and UC Davis.

Starting in 2011, Villavicencio began sampling fish populations and heavy metal concentrations every three months with the help of fishermen in the local area.

Due to the fact that all of these metals have major implications on the lake, fish, wildlife, and human populations, Villavicencio conducted heavy metal analyses of mercury, arsenic, manganese, and copper within the fish.

By carrying out these analyses, Villavicencio hoped to better understand how the metals flow throughout the lake’s food web as well as create a guide for locals on various fish species.

Based on the fish sampling analysis, Villavicencio concluded that while heavy metals are produced through natural processes, anthropogenic factors are also contributing to the accumulation of these metals.

For example, arsenic could be coming from the natural processes of the surrounding volcanoes as well as farmers. According to Villavicencio, arsenic has major implications on fish and human populations due to the fact that it can cause neurotoxicity and heart diseases.

According to the recent State of the Lake Report that was compiled by Unidos por Lago Atitlán, “there has been no apparent improvement in wastewater management around the lake in recent years despite the cyanobacterial bloom of 2009. There is still direct sewage input visible in locations such as Panajachel, Santa Catarina, and Santa Cruz; the rivers San Francisco and Quiscab are also significantly contributing to nutrient loading to the lake.”

Unfortunately, many researchers involved in the lake have shared their frustrations when working to implement changes in wastewater treatment practices and fertilizer usage.

Like many governments, there is an evident hierarchical system in which certain bodies are prevented from enacting strategies or policies without the stamp of approval from another.

“The system is not set up to make it [conservation] easy,” says Monica Berger González, a cultural anthropologist who has been studying local communities around the lake.

During her time researching San Juan la Laguna, a town on the southern shore of the lake, Berger González watched Lake Atitlán transition from a clean to a dirty water body. 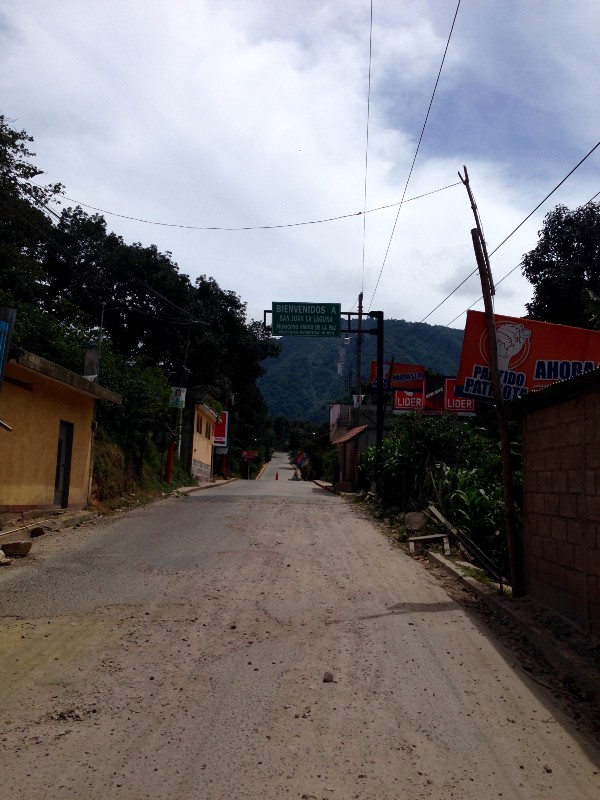 In order to reverse the sequence of this transition, Berger González discussed how important it is to understand human systems along with acknowledging epistemology, the study of knowledge.

Since there are many different systems of knowledge around the lake, epistemology can help us to better understand the multiple, complex, ecological, and social interactions that take place within the entire system.

Furthermore, Berger González believes that Mayan beliefs about social wellbeing directly coincide with environmental conservation. For example, ancient Mayans believed that health was an indicator of balance, while disease and illness were representative of disequilibrium. Along with the interrelationship between health and balance, there is a clear conception that everything encompasses a spirit.

“The lake is a reflection of ourselves. If the lake is sick, we are sick,” Berger González said. “We need to fix ourselves inside and not the lake.” 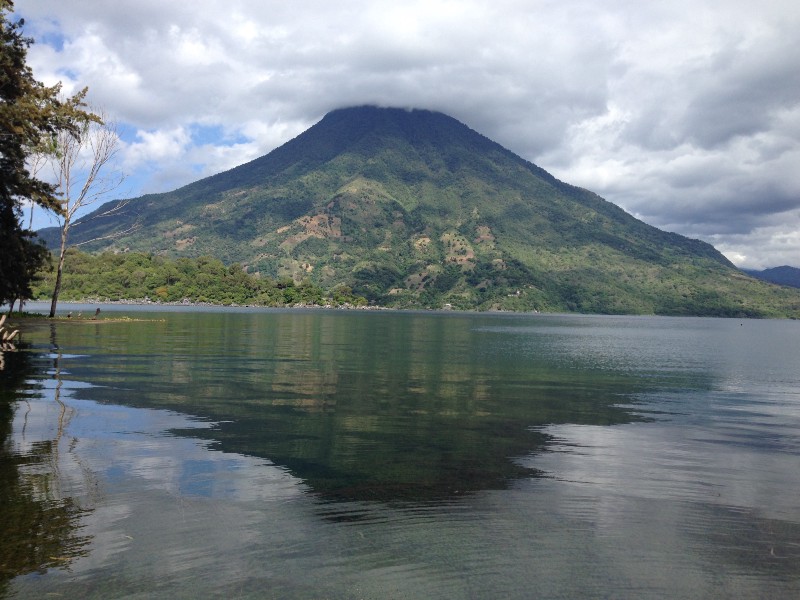 One of the three volcanoes surrounding the lake

Berger Gonzáles went on to explain that there are often correlations between what goes on in your own mind and policy implementation.

“In regards to policy implementation, the language we use can often ignore important aspects of human life like the spirit, mind, body/health, and emotions,” Berger González said. “And there is an interface between academic and policy that we often don’t explore.”

In order to conserve Lake Atitlán, these aspects of human life must be considered. This statement does not just apply to Lake Atitlán as it must be applied to the multiple, natural wonders and ecosystems around the globe.

We are ultimately a part of the destructive processes that leave rivers polluted with chemicals, that destroy large expanses of forests, and that eradicate the biodiversity which is left remaining within the unexploited regions of the world.

The main goal of attaining harmony, respect, and coexistence lies at the heart of the sixty-seven Mayan communities in Guatemala. Although a countless number of global environmental issues continuously illustrate the setbacks in reaching harmony, respect, and coexistence, local communities around the lake are working to reinstate this goal among each other and their natural environment.

As the fishermen of San Juan la Laguna depend on the lake for their livelihood, they also strive to provide something for the lake as well. Recently, they constructed boats to collect waste and have also replanted plant communities that are vital to the lake’s ecosystem. 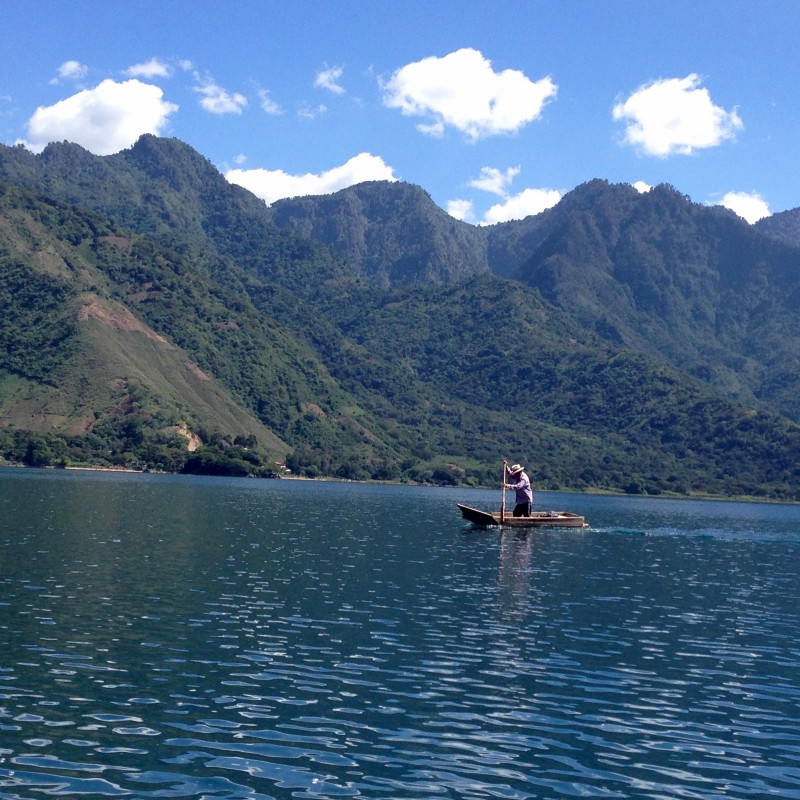 In order to save Lake Atitlán, harmony, respect, and coexistence must be realized.

About the Global Learning Hub at UC Davis

The Global Learning Hub is the nexus of global learning at UC Davis. The hub’s network of domestic and international academic programs, global experiential learning, and living and leading opportunities develops capacity for all UC Davis students—undergraduates, graduates, and professional students—to engage with global issues, becoming the next generation of leaders to address challenges that affect us all. Search all global learning opportunities available at UC Davis.

Aggies Abroad: Sophia at Sea: How to Get Started and Make Your Dream a Reality

My Global Learning: Global Education for All Fellow and Podcaster